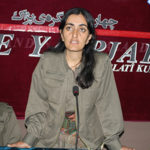 By insisting on our social and revolutionary values, we will expand our campaigns towards the solution of Kurdish issue

Fourth Congress of our Party held in a global political turmoil, which has reached its peak. The foundational base of the world system which is based on nation-state model is proven ineffective and the system entirely in a deep crises in all the aspects. This model which has not given any result other than physical and cultural genocides of peoples has resulted in much destruction of the world particularly in the Middle East. Also the nation-state model has destroyed the contexture of political, social and cultural of the region in a wide range. Meanwhile the democratic alternatives are discussed more than over by the pro-democracy and combatant circles.

Iran is among Middle Eastern countries which constitutes one of the major parties of crisis and also has engaged in acute social and political issues of domestic with a strong influence of. For this reason Iran would not be able to rid itself of the risks of the status quo. Policies based on oppression, pressure, denial of identity, culture and drift of assimilatory has not had achievement for the peoples. Implementation of such policies increased the scope of democratic and liberation struggles of peoples culminating Kurdish nation which is regarded as one of the basic dynamics of democracy in the Middle East, especially Iran. Our people began a new chapter of their campaign against the genocide policies with new and democratic approach within Free Life Party of Kurdistan, PJAK.

Over a decade of the founding of our Party with unremitting struggle under the slogan “Resistance is life“, today we are witnessing the formation of a new cultural struggles in Rojhelat (East Kurdistan). During all these years the main target of PJAK was creating a society based on self-determination and pioneer in this regard. The fundamental axes of all PJAK activities were creating a free character also cadres who are driven the culture of resistance against to undermine the community, in this way was gained many achievements.

We are at the beginning of a new chapter of our party campaigns that its content will be further expansion of political, ideological and organize our people. Today’s Kurdish Nation scouts our Party has become one of the crucial factors of democratic transformation in Rojhelat. The Islamic Regime of Iran will not be able to get rid of political and social crisis in the domestic and regional level without considering this strong dynamics of social and political called “solution to the Kurdish question in a democratic way“.

PJAK has established its campaign to focus on solving the Kurdish question and other nations of Iran relying on paradigm for “Democratic–Ecological society based on Women’s Freedom”. The Free Life Party of Kurdistan also insists on democratic approach and elimination of security perspective towards the Kurdish issue. The main PJAK’s targets will be establishment of “Democratic Self-Rule” as a political aspect of democratic nation, suggests this model out of power and government-oriented paradigm as a “right to self-determination” for other people of Iran with ethnic, religious and linguistic diversities.

1. PJAK gives a struggle and enhances resistance in order to establish a free and democratic community on the basis of democratic-ecological society and women’s freedom paradigm.

3. PJAK deems itself responsible for the establishment of a democratic society and leads the political and ideological struggle in Rojhelat within KODAR system.

4. PJAK views establishment of Democratic Self-Rule not only for Kurdish people but also for all Iranian peoples in the democratic autonomy model and leads the formation of a real Democratic Republic.

5. Women are the liberty pioneers of community. One of the fundamental principles of PJAK is equal participation of women in all spheres of activity and organization of party, on this basis adopts the Co-Chair System delegated to Evîndar Rênas and Ebdulrehman Hacî Ehmedî.

6. Taking self-defence as a fundamental principle for democratic and free community, PJAK regards this as one of the tasks of the KODAR.

7. PJAK predicates the resolution of the Kurdish question on democratic principles trough dialogue and negotiation, calls elimination of security perspective towards the Kurdish issue. Despite the ceasefire declaration in 2011 by PJAK, Iran has not used only this opportunity but has insisted on this approach increasing the repression and executions of political prisoners. Fourth Congress of our party once again emphasizing the principle and democratic approach is reminding this historic opportunity to the Iranian Regime.

9. Ally of the Iranian democratic wings is inevitable for transition to the genuine democracy and its stability. On this basis, PJAK invites all democratic parties and organizations, women and youth for a common struggle.

10. PJAK owes its existence to all martyrs and their families especially mothers suffering and sacrifice, ask development of political and ideological struggles also promote a culture of resistance towards democratic society.

In this framework the fourth Congress of our party is a major step towards democracy and freedom. We congratulate the people of Kurdistan and Iran, families of the martyrs and all freedom fighters.