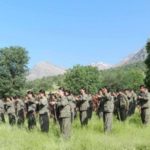 Clashes between HRK and the Iranian Revolutionary Guards

To the public opinion:

On the 19th of May 2013, the Iranian revolutionary guards along with the local hirelings initiated a military operation against the guerillas of Eastern Kurdistan Forces (HRK) in the ”Candaran” region of the ”Serdesht” province. In result of this operation, the Iranians’ regime forces and our guerillas spawned a clash which ended by the death of two local hirelings, whom one of them is the head of the hirelings and many of them have been wounded.

In this clash our forces did not face any lose. After the clash the regime forces severely bombarded the region.

By considering this current sensitive stage we are enduring, it indicates that such clashes are not in favor of any side and we postulate that the actions and behaviors should be based on the sensitivity of the current stage in order to avoid such incidents from happening.