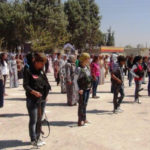 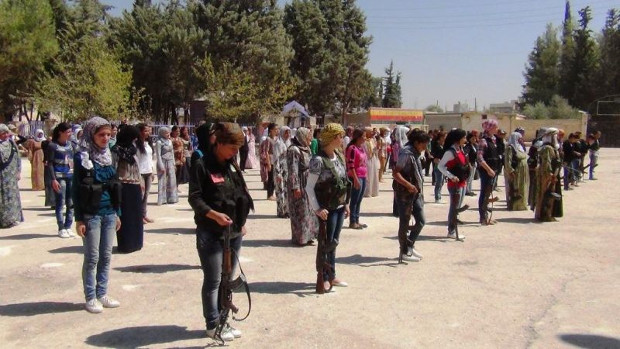 The Kurdish people in Rojava (Western Kurdistan) poses a potential force to strength the democratic process and become proper model of democracy in entire Middle East by relying on their innate and revolutionary power. What we mention as “Spring of Nations” practically appeared in Rojava. Therefore, a reactionary and local hireling forces with the aid of regional and international forces, which do not tolerate the great achievements of Kurdish people and what the Kurds achieved outside of their plans, have attacked the Rojava with all their forces and available means such as Al-Qaida forces.

Mercenaries and Terrorist forces, nationals of Chechnya, Libya, Iraq, Saudi Arabia, Pakistan, and Afghanistan have been organized and hired by the regional and international forces in an attempt to introduce them as the Syrian opposition. Saudi Arabia is financing and Turkey is equipping the terrorist organizations with weapons in order to use them as a tool against the Kurdish people in Rojava.

Al-Qaeda networks in Afghanistan and Pakistan travelling through Iran and Iraq to join the terrorists in Syria with the aim to intensify their deadly war against the Kurds. Islamic regime of Iran with the aim to minimize the pressures on Assad regime have established a save pass way for the Al-Qaeda members to join the State of Iraq and Sham and Al-Nusra to fight the Kurds in Rojava. The Islamic regimes position towards the crimes committed against the Kurdish civilians in Rojava is evident of regime’s involvement in recruiting the Al-Qaeda members in Syria to fight Kurds.

On the other hand, some international forces who have had hypocritical position toward the Kurdish question, have plotted scenarios to deceive public opinions by claiming that hundreds of Al-Qaida prisoners in Iraq, Afghanistan and Libya have been escaped. However, taking into account the hypocritical position of the mentioned forces, the Kurdish people believe that the Al-Qaeda prisoners had escaped in a pre-planned scenario with the aim to be recruited in Syria and fight Kurds in Rojava. Furthermore, some Salafi-related figures in Southern Kurdistan openly called people to join All Qaeda. These forces are responsible for ongoing massacre that has resulted in mass exodus of people. Even though slaughter of Kurds is happening right in front of global sight, yet several regional and global powers are trying to doubt its validity and carefully planning to distort the facts. All these events suggest that our nation in Rojava is facing a brutal and barbaric invasion. We, as PJAK announce our support for revolution in Rojava and condemn every States and powers who are involved in inhuman massacre of Kurds through Al-Qaeda.

In the this critical period in which the Kurdish people are stepping toward holding the national congress, we (PJAK) asking all Political and Civil organizations, politicians and members of NGO’s to put the Kurdish issue in Rojava and Syria in the center of their internal and foreign policies. Success of Kurdish movement in Rojava and protection of the achieved values is equivalent to the success of Kurdish people as a whole in the rest of Kurdistan. Uninterrupted and vigorous resistance of Kurdish people and countless martyrs have resulted in the emergence of free and democratic atmosphere in Rojava.

Hence it is unacceptable to be silent and avoid taking a solid position against massacre of Kurds which is taking place in Rojava. We (PJAK) do ask Kurdish people in Eastern Kurdistan to take actions consciously toward ongoing events in Rojava. PJAK is aware and monitoring the activities of several individuals and groups, such as Salafi extremists, are recruiting Kurdish youth in Eastern Kurdistan by promising them some material gains and deceiving them. Similarly, in the Southern Kurdistan several Kurdish youth were sent to join Al-Nusra terrorist group in Syria with the aim to combat Kurdish people in Rojava.

We (PJAK) do ask Kurdish people in Eastern Kurdistan to adopt thoughtful and proper measures to prevent youth from falling into the trap and be deceived by Salafi groups. In addition to that, we (PJAK) also demand the Islamic organizations and religious patriots of Eastern Kurdistan to publicly condemn savagery crimes committed by Al-Qaeda in Rojava.

Kurdish people in Eastern Kurdistan have been playing an effective role in Kurdish politics throughout the contemporary history and very well known for their logistic and spiritual contribution at the time of crises in other parts of Kurdistan. We (PJAK) strongly support the democratic achievements and the remarkable resistance of the Kurdish forces in Eastern Kurdistan. We (PJAK) call every Kurd in Eastern Kurdistan to demonstrate their revolutionary and patriotic perspective by keeping up their broad support in forms of humanitarian aid to assist the revolution and resistance in Rojava. It is expected that civil institutions, Human rights organizations and Kurdish patriotic figures to take effective role in this context.