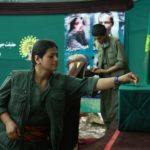 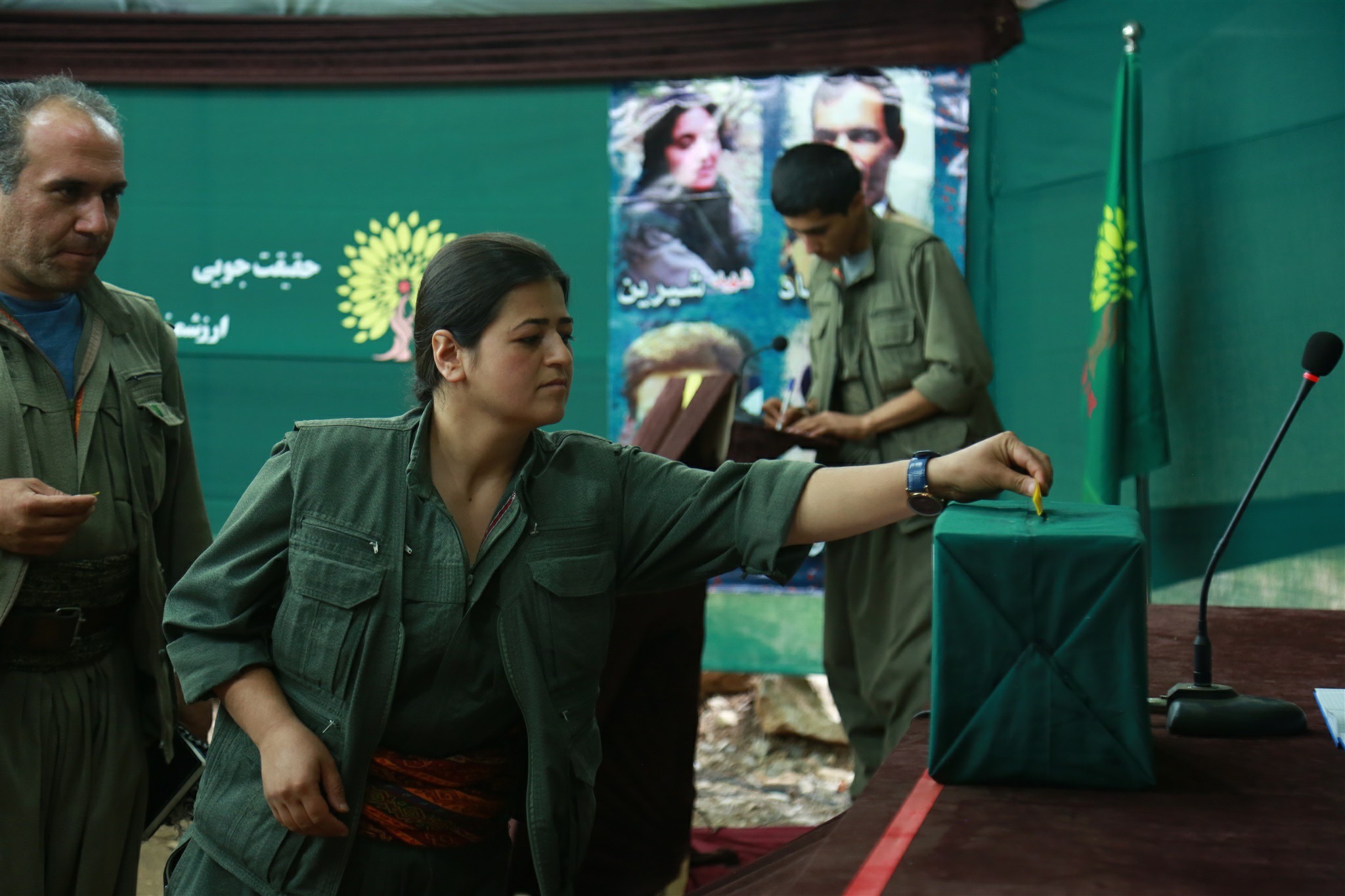 The Second Congress of KODAR was held on the 22-24 Of October 2016. This Congress started with condolences for all peoples resisting In Iran and Eastern Kurdistan. The Congress remembers the memory of all those martyred in the struggle for freedom. In particular, special consideration was given to the martyrs of Salas.

KODAR started the Congress with an in-depth analysis of the Middle East and the role of Iran in the chaos that has engulfed the region. The analysis included the influence of Iran and also presented methods of overthrowing the system. The current chaos in the Middle East creates fears of a Third World War in the region. The presentation highlighted that the struggle for control by both regional and external powers caused the current issues the region faces today. These problems emphasized the need for a new political alternative that would solve the problems and not exacerbate them as the current powers have done. It can be said that the chaos created by these powers has disillusioned the people. This disillusion has created a vacuum for new alternatives and new politics to take shape. As a result, Kurdistan is playing a role greater than ever before: the struggle of Kurdistan is shaping an alternative that rejects not only the traditional, conservative culture that has a tight grip on the region but also the nation-state paradigm which has been exposed as a key factor in the instabilities of the region.
The presentation outlined that the policy of Kurds follows an ethical stance based on the emancipation of all the peoples of the region. This historical resistance challenges the international political system and aims to reverse the chaos generated by regional powers. This struggle to democratize the Middle East by the Kurds underlines the key role that Kurds play in Middle Eastern politics.
Particular focus was given to the role of Iran in the problems that the region faced. Iran’s problematic policies forced it to try and have a greater influence on neighboring countries thus perpetuating the cycle of instability in the region. Indeed, the politics of Iran has forced it to center the issues of the region as its main strategy. This policy meant that Iran has interfered in the problems of many neighboring countries. The administration of the Islamic Republic of Iran has fallen into panic and this has caused Iran to act irrationally. Rather than being a force destabilizing the region, Iran needs to solve the issues faced internally by providing freedom to all ethnic minorities. The Iranian state needs to understand that its political perspective on different groups of people within Iran creates an inherent inequality which subjugates minorities.
Today, it is clear that Kurds have a greater role and influence in the region. This coincides with the extraordinary struggle of Kurds against other Middle Eastern groups who aim to oppress the different indigenous peoples of the land. With this understanding, it is clear that the Kurdish people also have the ability to influence the social fabric within Iran. This influence of the Kurdish movement is a stabilizing force that pursues the democratization of the people. Its aim has been not just to free Kurds from suppression but also to liberate all the different ethnic groups of the land. Therefore, if Iran does not change its stance, it will face serious problems. This is because the Kurdish people have the potential to declare a new social order that will revolutionize Iran as shown by the struggle in Western Kurdistan.
KODAR began its own project focusing on alternative and democratic ways in Iran and Eastern Kurdistan. KODAR also created a strategic program for the political future of Iran.
The main subject of the Congress was The Democratic Alternative, analyzing the socio-political context. This analysis was followed by dialog and finally a decision by the main members of the Congress.

As a result, KODAR stated the following:

1) KODAR, as an entity that pursues the democratization of Eastern Kurdistan, follows the ideology of Democratic Confederalism and rejects the nation-state. KODAR intends to create social communities, which are based on the model set out by Democratic Confederalism. This is done with the intention to create a social network at both the local and regional level, which pursues the desire to free all the different ethnic groups of Iran. As a result of this, KODAR stated that all the different groups of society based on identity, ethnicity, religion and other modes of social differentiation, have the inherent right to join and work towards Democratic Confederalism.

2) In all the different states, whether regionally or internationally, KODAR will follow the third democratic line in its fight for freedom. This means that KODAR’s policies will not be affected by the policies of the governments in the region but rather that KODAR will follow its own policies. KODAR unreservedly rejects the boundaries set by the major powers dictating to the peoples of the region.

3) KODAR will try by all means to help liberate the leader of all Kurds, Abdullah Ocalan. This will be done by KODAR influencing society to bear pressure on the forces that maintain the isolation of Abdullah Ocallan.

4) The Islamic Republic of Iran must accept the inherent right of those who follow Democratic Confederalism in Eastern Kurdistan. Iran must change its laws to reflect this reality. If Iran were to accept this reality and implement changes, then KODAR can have normal relations with the state. Alternatively, if Iran fails to take heed of the desires of the people then it would leave KODAR with no choice but to implement the ideology irrespective of the Iranian regime.

5) In this way, KODAR will become a beacon of hope for people of all ethnicities and religions aiming to gain their rights and freedom. Accepting and implementing a desire within the social fabric that protects all the different peoples of the region can only do this.

6) Women and the youth are the main dynamic force propelling KODAR’s movement in pursuit of Democratic Confederalism. This is because the ideology focuses on the liberation of women as a fundamental pillar of society. .Leaderity_Co its of Parts all in (Men and Women) Equlaity Gender The as its System Template Furthermore .System Confedralism Democratic the Power of KODAR to Recognize Women and Youth Are Main Dynamism

7) Capitalism survives today through the exploitation of different industries, of nature and through the use of resources and capital. As a result, there has been immense destruction of nature in Eastern Kurdistan. KODAR placed particular attention on the exploitation of the land by the Iranian state that aims to plunder for its own greed. This destruction creates a disconnection with the land that harms the socio-historic identity of Kurds.

8) KODAR reserves the right to protect itself and to respond in self-defense. KODAR is a force that desires to protect its people and not to harm others. Its people can be defined by anyone that shares the desire for democratization of the region and is not limited to any particular ethnicity or religion.

9) In order to democratize Iran, KODAR aims to consolidate and concentrate the desire of the masses for freedom. This is a potential that the Second Congress of KODAR aims to fulfill by working with different nations such as, but not limited to, Kurds, Azeris, Arabs, Balochis, Turkmens and Fars. This democratization will be implemented openly in front of the Iranian state.

10) KODAR is ready and willing to have dialogue with other forces pursuing freedom in Eastern Kurdistan. KODAR works in the belief that the socio-political potential of Kurdish society needs to be recognized and fulfilled. KODAR accepts that its practices will be fundamental to the fulfillment of this potential.

The members of KODAR’s Second Congress analyzed all of these terms. All members of KODAR assume the right to practice these terms and ideals and to implement programs in pursuit of these goals. In addition, discussions began about the changing of the Presidency of KODAR. This started with the formal election of two members of the Congress: Miss Zilan Tanya and Mr Fuad Beritan. KODAR and all its members of the Congress congratulate the elected members. The Second Congress of KODAR ended with the call for all Kurds of Eastern Kurdistan to pay tribute to the memory of those martyred fighting for democracy. In closing, KODAR called on all social powers and factions to join and work with KODAR towards Democratic Confederalism and the true democratization of Eastern Kurdistan and Iran.