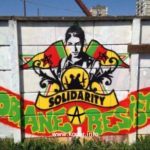 Four Things the Left Should Learn from Kobane

The Kurdish town of Kobanê has recently become the centre of a geopolitical conflagration that may well change the course of Middle Eastern politics. Note: This Article was published on October 07/2014 In thisorderofthings.com

After months of silence over the threat faced by Kurds from ISIS, the world is now finally watching, even if the ‘international community’ remains conspicuously quiet. However, many Western responses, be it from scholars, journos or activists, have somewhat predictably retracted into recycled critiques of US and UK imperialism, often at the expense of missing what is truly exceptional and noteworthy in recent developments. So, in the style of contemporary leftist listicles, here are four things we can and should learn from events in and around Kobanê.

1. It’s Time to Question the West’s Fixation on ISIS

If Barack Obama, David Cameron and Recep Tayyip Erdogan are to be believed, the ‘savagery’ of ‘fundamentalism’ is the primary focus of NATO involvement in Syria. Notably, many left critics have reproduced this very same fixation on ISIS when discussing Western interests. However, for an almighty imperialist organisation supposedly hell bent on stopping ‘Islamic extremism’, NATO have been curiously ineffective. In fact, the US has been indirectly responsible for arming ISIS and altogether incompetent and/or reluctant in arming the decidedly secular Kurdish resistance. US and UK air strikes have been fleeting, and at best symbolic, making little impact on the advance of ISIS. Moreover, Turkey has repeatedly turned a blind eye to ISIS’s use of its territories and borders for training activities and supply lines, respectively. More recently, as Kobanê teetered on the edge of conquest, Turkey insisted any military assistance was dependent on the Kurdish PYD abandoning self-determination and self-governing cantons, and agreeing to Turkish buffer zone in Kurdish controlled areas in Northern Syria (which amounts to little more than a colonial land grab). Now, considering the USand UK were keen to intervene long before ISIS was seen as a threat, and considering Turkey long-standing hostility to the PKK/PYD, we should be more demanding of any analysis of intervention that begins and ends with ISIS. In short, it is becoming increasingly clear that ISIS is little more than a pretext for NATO to pursue other geopolitical aims – namely removing Assad and destroying Kurdish autonomy.

2. Be Wary of Liberal Internationalism

Many anti-intervention critiques have argued that non-military options remain available through diplomatic channels and pressure on regional players such as Iran, the Gulf States and even Russia. This is to misread the geopolitical situation in the Middle East. Firstly, the US does not control every allied state with complete impunity. Despite historical relations of dependency, despite metaphors of ‘puppets’, most Gulf States are remarkably powerful actors in their own right, with interests and activities that are beyond US control. Any suggestion to ask the Saudis to end financial support is likely to be as effective as asking ISIS to calm down a bit. Secondly, to call for American diplomatic engagement with Russia and Iran is to assume relations of international cooperation that simply do not exist. It is to wish away long running geopolitical rivalries among three nation-states vying for regional dominance. It is to place undue emphasis on the agency of Western states – “if only the West made the naughty Eastern countries do this or that, the conflict would be resolved”.

Finally, it is to marginalise and thus close off the possibility of any non-state and anti-capitalist alternatives based on the PYD/PKK project of Democratic Autonomy. Indeed, it is unclear why the imperatives and motives of imperialism that are so prevalent in military action would not be equally problematic when it comes to ‘peaceful alternatives’ directed either by Western states, or indeed reactionary and anti-democratic regional powers. As such we should critically question government claims that military intervention is ‘the only option’. But we should also be wary of empty pacifism based on (neo)liberal and state-centric conceptions of cooperation, insofar as conditions for the latter are absent (and by the way, in the capitalist state system, they’re always absent).

The Western left often suffers from a debilitating and orientalist tendency to overstate the agency of the US and relegate communities and societies affected by intervention to passive actors, not worthy of considered analysis. Indeed, it is striking the number of anti-imperialist commentaries that rely less on the experiences and dynamics of Kurdish communities and more on rehashed critiques of the logic of Great Power predation. On the one hand, this can cause the left to duplicate caricatures of ‘ugly sectarianism’ and ‘Islamic fundamentalism’ in ways that don’t seem too far off the arguments of Cameron and Obama (for some useful correctives see here and here).

On the other hand, it offers little consideration of the voices of Kurdish communities under attack since their intentions and actions simply don’t matter to opposing ‘imperialism at home’. The resultant politics can often be deleterious. We might wonder, for example, what the people of Kobanê would make of calls for ‘peaceful alternatives’ to war. This is especially important, since in Western Kurdistan (Northern Syria) Kurds are defending what is arguably the best hope for left politics in the region. Even the most cursory glance at the constitutional make-up and political achievements of Kurdish cantons would put most Western organisations to shame. Yet this week, while hunger strikes and solidarity demonstrations from Kurdish people were taking place in the UK and beyond, anti-war groups organised an entirely separate and potentially conflicting protest. The sooner the Western left abandons its penchant for reducing class to geopolitics, the sooner it can offer authentic solidarity to groups and communities that deserve and need it.

4. Keep an Eye on Turkey

As a result of the Turkish response to Kobanê, Kurdish people and their allies have taken to the streets in towns and cities across Turkey, clashing with police and the gendarmerie to a degree not seen since the resistance movement of 2013. The protests have been militant and focussed, barricading streets, targeting checkpoints, banks, police, military and government buildings and, according to some reports, liberating certain districts. As of late, Turkish politics had been at an impasse with the energy of Gezi seemingly dissipating between the pincer movement of state violence and Erdogan’s electoral victories. At the same time, the so-called Kurdish peace process has stalled, perhaps irrevocably, as the Turkish state’s reconciliation has proven to be little more than lip-service. It is difficult to predict whether the current confrontation between protesters and the state will escalate, but it is clear that Turkish machinations in Kurdistan will lead to a Kurdish response in Turkey.

Large sections of Turkish society remain deeply racist (last night a twitter hashtag inciting violence against Kurds was trending in Turkey) and so polarisation is likely. However, there are reasons to be hopeful that this time may be different. Gezi has prefigured a new – but still very imperfect – support for Kurdish liberation, most clearly evidenced in the unprecedented support for the pro-Kurdish HDP in Turkey’s recent presidential elections. Moreover, in Kobanê, Rojava and elsewhere the PKK/PYD model of Democratic Autonomy constitutes a powerful working alternative to the authoritarianism of the AKP. In this respect, the future of Kobanê is crucial to the democratic and revolutionary hopes of Turkish, Syrian, as well as Kurdish, people.