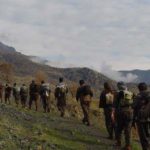 Qandil Mountains, – Some have called them the “Iranian branch” of the PKK, the Kurdish separatists who have been waging a guerrilla war in eastern Turkey for over twenty years

That’s certainly what the governments of Iran and Turkey would like the world to believe.

But in extensive interviews at rebel bases deep in the Qandil mountains on the Iraqi border with Iran, PJAK guerillas denied that they were a branch of the PKK.

They called the PKK a “sister organization,” but nothing more.

While they claimed “a strong affinity” with the thinking of PKK founder Abdullah Ocalan, now in a Turkish jail, they argued that their party is totally separate from the PKK.

A Turkish Kurd named Xerat, who commands a PJAK guerrilla base within sight of the Iranian border, told Newsmax that he joined an Iranian rebel group that ultimately became known as PJAK in early 2000, after Ocalan disbanded the PKK’s military wing.

“Since 1993, I had been with the PKK,” Xerat said. “Once Ocalan disbanded the organization, I joined PJAK.”

Xerat brought with him extensive experience as a former PKK guerilla leader, which he has been able to pass on to new PJAK recruits.

But as he and former PKK members made clear, the PKK simply doesn’t exist any longer as a military organization. PJAK was built “out of the ashes of the PKK,” guerilla leaders said.

The Kurdish guerillas whose bases Turkey now wants to hit in Iraq are either PJAK, or the self-defense forces of the recently-created pan-Kurdish People’s Congress, the KCK.

“After the PKK dissolved in 2000, separate parties were set up in different parts of Kurdistan,” Nilufer Koc, a vice-president of the KCK, told Newsmax in an exclusive interview in northern Iraq.

Among the newly-formed parties were PJAK, the Party for the Democratic Union of Syrian Kurdistan (PYD), and the Party for a Democratic Kurdistan (PCDK) in Iraq. In the latest elections for the Kurdish Regional Government in northern Iraq, the PCDK got less than 1% of the vote.

Unlike the PKK, which sought to establish an independent Kurdish entity, the newly-formed KCK and its member groups have a different goal and use different methods, she said. “Each is seeking to establish a confederation within their country, and to democratize all those regimes.”

Instead of launching broad offensive military actions aimed against government troops and facilities, the “People’s Defense Forces” (HPG) now operating in Turkey seek “to prevent reprisals against local families and activists,” she said.

On October 9, the HPG claimed responsibility for an attack that blew up a 100 meter section of the Iran-Turkey natural gas pipeline between the villages of Tewre and Takya\Dogubeyazit in eastern Turkey, part of an effort to disrupt the growing economic, diplomatic, and military ties between the governments of Turkey and Iran.

The HGP takes orders not from PKK, which today exists only as a rump political party, but from the KCK leadership, which is comprised of a central coordinating committee of 31 members.

Kurds are present in large numbers in Turkey, Iran, and Iraq, with a smaller Kurdish population in Syria. All four countries are represented in the KCK leadership.

For its part, PJAK seeks nothing less than to “change the regime in Iran,” said Biryar Gabar, a senior guerrilla leader who walked two hours down rugged mountain paths to meet with Newsmax at a rebel base near the Iraqi Kurdish village of Marado.

PJAK began to coalesce as a Kurdish resistance movement in 1999-2000, although it wasn’t official born until it held its founding conference in April 2004.

“The ideology and the philosophy of concentrating first on political work, backed by self-defense guerrilla forces, was a new paradigm set out by Abdullah Ocalan after he was jailed,” Biryar Gabar told Newsmax.

“We gained all the experience of the PKK. But that doesn’t mean that PJAK is the PKK,” he added.

The irony that both Iran and Turkey would seek to call PJAK a “branch” of the PKK was not lost on these guerrilla leaders, many of whom have advanced university training and spend their spare time in the mountains studying history and politics.

“Our country, Kurdistan, has been divided,” said Biryar Gabar. “So have our people. If the enemy gets together to fight the Kurds, there should be nothing wrong with the different Kurdish parties getting together to have a dialog and common strategy to fight the enemy.”

The fact that Iran and Turkey were treating the Kurdish resistance parties as a single entity argued that they considered Kurdistan to be a single entity, he said.

But neither PJK nor the Kurdish People’s Congress is seeking to establish a single Kurdish state. Instead, all have focused on the struggle to achieve political and cultural rights and the respect internationally-recognized standards of human rights in each country where Kurds are present in large numbers.

PJAK forces have played a strategic role in protecting Iraq’s borders and preventing the infiltration of arms and insurgents from Iran, Gabar added.

“Between August 16-24, the Iranians tried to seize the border line in the mountains, but we pushed them back. If they had been successful, they would have controlled this whole area and been able to open a new smuggling route for arms and Islamists into Iraq,” he told Newsmax.