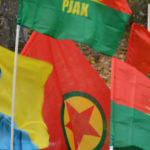 On 28, 29 and 30 of October 2013, Kurdish people in several European countries protested against the execution of two members of PJAK (Free Life Party of Kurdistan) Hebibullah Gulperipur and Reza Ismaili, carried out with mass hanging of Baluch political prisoners.

The Kurds in Europe manifested their disgust and protested against the inhumane policies of Iranian regime in front of Iranian embassies.

The protest was carried out in Sweden with the participation of some civil organizations, Baluch People’s Party also PJAK in front of Iran Embassy on Monday 15:14. In the protests, coordination member of PJAK Amir Karimi spoke to the crowd condemning Iran’s actions.

Below is a list of political organizations that attended the protests in Stockholm:
Free Life Party of Kurdistan (PJAK)
Baluch People’s Party
Farzad Kamangar’s Foundation
Kurdistan Human Rights Association in Europe (KMMK)
Azarmehr Organization of Women of Kurdistan
House of People in Sweden

On Monday 13:13 the protest was held on the PJAK’s initiative beside Iranian Embassy then a speech was given on behalf of the PJAK.
Kurdish people expressed their anger against Iranian policies with chanting slogans.

The name of the participants in the protest is as follows:

Monday 12:13 the Kurds in Finland also held a demonstration in front of Iran’s embassy. Then a speech was given by the representative of PJAK Ehwen Ciako emphasizing that these executions will not go unanswered.

Monday 12:14 in a similar way, the Kurds living in Denmark showed their discontent against the execution of PJAK members and Baluch activists.
In the protest the Kurdish youths chanted against anti-democratic approaches taken by Iran’s hard-liners. Then speeches were given by representatives of PJAK and National Resistance of Al Ahwaz.

Brussels also witnessed a demonstration against Ruhani’s new government. The protest was arranged by PJAK committee on Monday 12:14. In the event PJAK’s massage was read.

The Kurds in Germany took to the streets on Monday at 12:15. Demonstration was organized by PJAK. It also involved The House of People in Frankfort and Kurdistan Human Rights Association in Europe (KMMK).

PJAK Committee in Manchester held a protest on Wednesday 12:13. In the event statements of PJAK, Kurdistan Democratic Solution Party (PÇDK) and Democratic Union Party (PYD) were read out.
The event ended with reading Ehmed Shaheed Report the special rapporteur on the situation of human rights in the Islamic Republic of Iran, by PJAK Committee.

Kurdish people protested after their campaign “We Want Justice”. Dense crowd condemned the inhuman acts with slogans marched towards the Iranian Embassy.

In all these protests, the PJAK has stressed to respond to the attacks by Islamic regime of Iran. On the PJAK’s statement emphasize was made on the common struggle of all Iranian nations against Iran’s genocidal policies.

In these protests, the Kurdish people showed their aversion against Islamic Regime of Iran holding placards and martyrs photos while chanting slogans. They chanted “revenge guerrilla, respond to the attacks launched by Iran”.