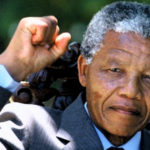 Mandela showed that without struggle, freedom and legitimate rights are impossible to achieve

First of all, we convey our condolence on the death of South African leader Nelson Mandela to all the oppressed nations and the libertarian peoples around the world, especially the heroic people of the South Africa.

Human societies in their very long history have always had charismatic figures leading their national struggle for freedom and spending their entire life in the way toward freedom and justice their nations aspired to. Nelson Mandela is one of the brightest stars in the sky of the liberation in human society. Until the last breath, he fought against injustice, racism and slavery. Not only for the African nations, but for all the freedom-fighters and the libertarian peoples around the world he was a symbol of struggle and resistance. Owing to this Mandela had a special respect for the Kurdish struggles and the Kurdish freedom movement.

As he deeply understood the freedom struggle against the occupiers of Kurdistan, the Kurdish people likewise and their freedom movement have understood and respect the values of the South Africa’s revolution and its leader Mandela. Mandela’s struggle and his resulting success proved that without struggle and resistance it is impossible to achieve legitimate rights and freedom. It was also proved that if the people continue to insist on their sacred purposes and resistance, the oppression will never continue, and the policies based on denial and elimination are always deemed to failure.

The only respond to Mandela’s demands and aspirations is to initiate campaigns for justice, freedom and the establishment of peaceful co-existence among nations. Undoubtedly, the revolution in South Africa and Mandela’s struggle for the Kurdish people and Kurdistan conveys a very important and historical message.

Although Kurdistan’s circumstance with the Kurdish national liberation movement are having some differences with that of Sought Africa, but our revolution has accumulated extensive experiences. Based on this, by getting experiences from the valuable struggle, and while the free societies around the world are in the mourning of such a charismatic leader, the Kurds must extend their struggle unprecedentedly to achieve freedom and their legitimate rights, in particular the freedom of the Kurdish national leader Abdulla Öcalan (Leader APO).

Once again, as the Free Life Party of Kurdistan (PJAK) we convey our condolences on the death Nelson Mandela to the freedom-loving peoples around the world, especially South Africans. Finally, we call on the Kurds and all the libertarian peoples around the world to extend their campaign for the freedom of Kurdish national leader -Leader APO- held in Turkish prison and increase their activities against racism, injustice, genocide and the lack of rights in Kurdistan.