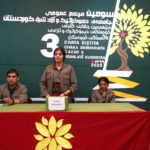 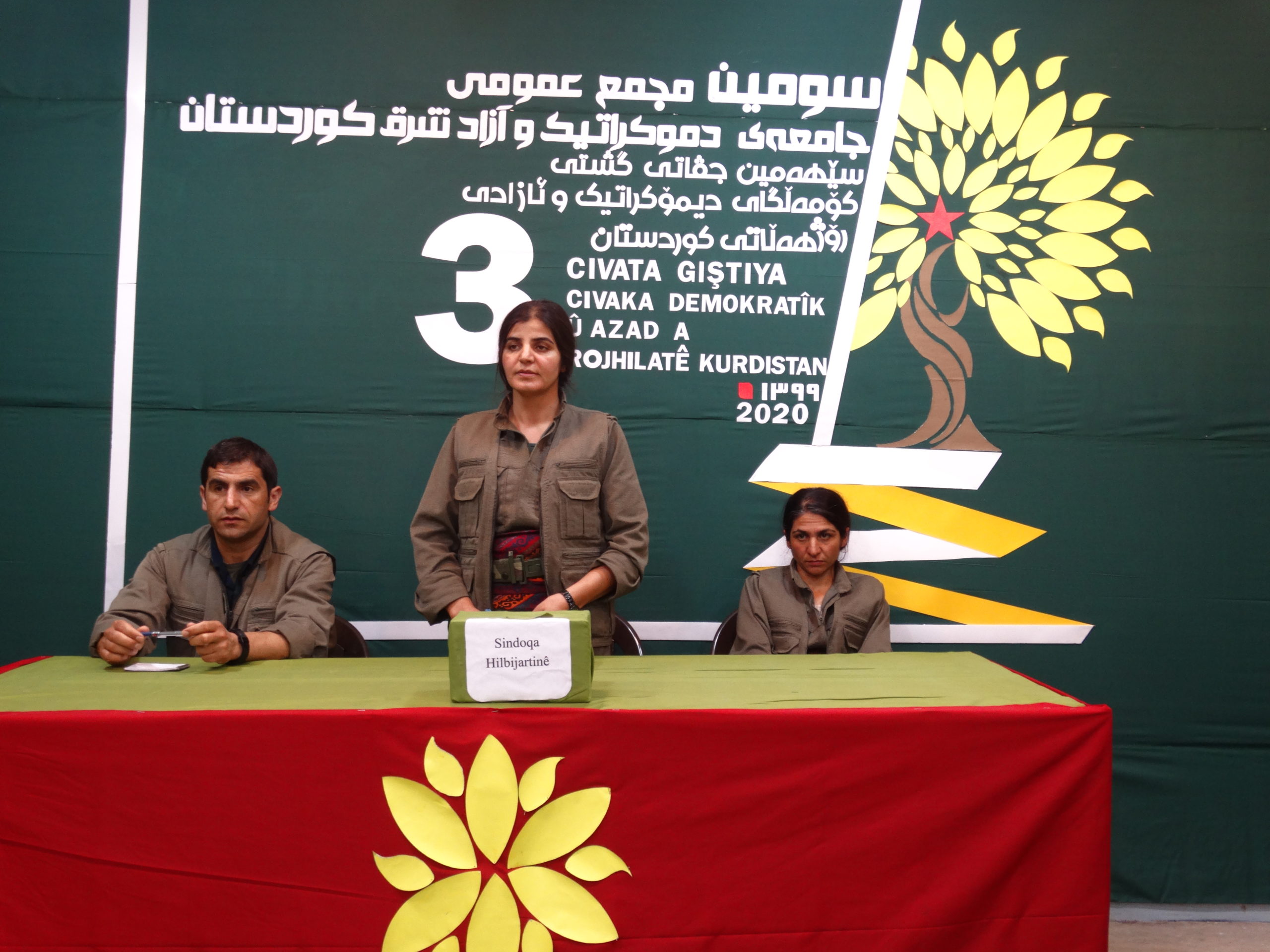 The third Congress of KODAR was successfully held on seventh, eighth, and ninth of May 2020 with the slogan “Organize the society with the revolutionary spirit of the people and liberate Kurdistan.” KODAR Congress was held in the mountains of Kurdistan, celebrating the Kurdish people’s struggles and the status of the martyrs of Freedom, especially our pioneer martyrs, Argesh Karzan, Tolhelldan Sine, Rojhat Bokan, Dilovan Sardasht and Iqbal Moradi.  The three days Congress continued with the participation of members and representatives of KODAR institutions and committees.

Congress began by examining the performance that has taken place over the past three years.  In this regard, valuable and constructive discussions were held based on the guidelines of Leader Apo and his analysis of democratic modernity.  Congress also expressed self-criticism about all the shortcomings and inadequacies in the leadership and advanced future plans for the development and progress of activities.  In a review process, it analyzed the activities of institutions, committees, and took the essential steps by reorganizing the committees to improve their effectiveness.  The Congress elected the KODAR’s Board of Directors, which has a total of 18 members, and by the majority of votes, Comrade Fuad Beritan and Comrade Gulan Fahim were announced as co-chairs.

The holding of the Congress in the days leading up to the 9th of May had a distinctive purpose as it resembles the renewal of promise with the martyrs of prison resistance, Farzad Kamangar, Farhad Vakili, Ali Heydarian, and Shirin Alamhuli and other martyrs of this field. Whilst commemorating the memory of these martyrs, Congress emphasized their way to be continued based on building a democratic and free society. Congress also addressed the situation of political prisoners in Iran and Rojhilat (East Kurdistan) and stated that the spread of the culture of prison resistance was a key condition for maintaining the stronghold.  It is necessary in the spirit of social cooperation of all areas of society to responsibly support political prisoners and their families in order to defeat the policy of permanent war against society.  Emphasizing on solidarity and cohesion around social values, Congress honored the memorial of the martyrs who defended the environment in Rojhilat, Sharif Bajur and his companions, the martyrs of the November uprising and the of healthcare staff of the hospital who sacrificed their lives in the fight against COVID-19.

Congress examined the political situation in the international and regional levels and analyzed the events in the Middle East from a paradigmatic viewpoint and different perspectives.  As the region has grown into a battleground for the Third World War and the global neoliberal system has begun on a new phase of colonialism, the Middle East has undergone rapid developments.  The current political and military situation is very similar to the First World War as the global system attempted to plan the order of the nation-state as an alternative to the imperial system.

In the current situation, the global system sees the old design as an obstacle for its interests. Therefore, it promotes the free market system. The global system once again stirs up the Middle East because it is still resisting the western projects. Despite the proxy wars, involvement in main forces in the war, heavy death toll, and destruction of vital infrastructures, we still do not see a successful solution model. It is worth mentioning that the regional governments have lost their efficiency and credibility from a long time ago. We should point out that the same global system created these governments without approval from people. The regional and global powers are looking to gain benefits from the people’s protests. They falsely claim that they are supporting the people’s demands. The people long for a project, which tangibly supports the demands of people.

Since the last 40 years, the Iranian regime has proven inefficient in management, infrastructure, politics, and production aspects.  The emergence of new social classes and the disappearance of old social classes have created new and broader societal gaps. The need for change is becoming more apparent. There is a significant separation between the people and the government. The change in the way of life, higher literacy rate, global communications, and advancement in technology have made different demands in society and resulted in the emergence of new social classes. The regime with such a level of resilience cannot fulfill those demands, making the gaps in Iran’s power infrastructure more visible. The lack of cohesive and unified leadership among the opposition has provided a security margin for the Iranian regime.

By utilizing the philosophy of Leader Apo, the movement has chosen the ‘third front’ of struggle and organization. According to this philosophy, the organization positions itself in line with the Popular Front (people) instead of seeking power as a strategy. It represents the third front by introducing a new form of social and cultural organization based on the general mentality of the Middle East. It is based on the coexistence of nations inline with historical resistance in the form of a democratic confederation of people. With political and social rationality, KODAR has taken a step towards resolving the problems accumulated in Rojhilat.

KODAR analyzes the conditions of Rojhilat and is aware of the social and historical demands. In this regard, it has organized our people in Rojhilat, which includes all social diversity. The democratic and free society of Rojhilat aims to establish democratic confederalism as the central goal in Rojhilat and Iran through struggle. Undoubtedly, despite all opposition from global and regional powers, this model has shown its efficiency and capability in the most challenging situations and paves the way for a lasting peace among the Middle East, Iran, and especially Rojhilat. The third Congress of KODAR analyzes the challenges and presents the following as a conclusion to achieve the goals and aspirations of our people;

To create a free and democratic society, KODAR continues to fight for the coexistence of people and the social diversity of Rojhilat with the wisdom, strength, and spirituality gained from this Congress. Once again, while expressing self-criticism on our shortcomings, we will try to take a more substantial step towards the fulfillment of democratic self-governance. We congratulate the successful outcome of this Congress to leader APO, the martyrs, political prisoners, families of martyrs, and the people of our homeland. Finally, in order to establish a self-governing social and political system, we send an open invitation to all spectrums of NGOs, teachers, women, youth, veterans, social trustees, religious leaders, lawyers, artists, intellectuals and human rights activists.

LONG LIVE THE DEMOCRATIC UNION OF THE PEOPLE 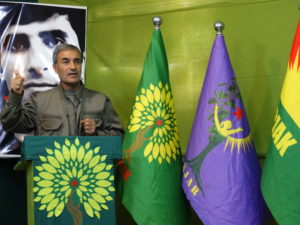 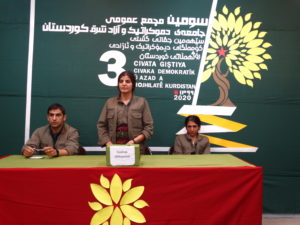 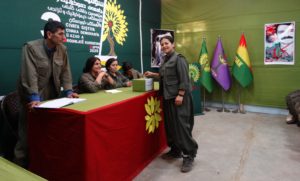 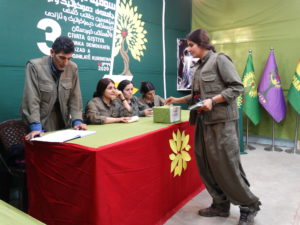 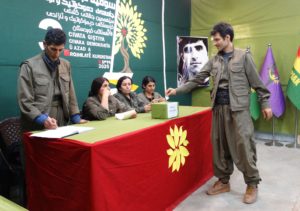 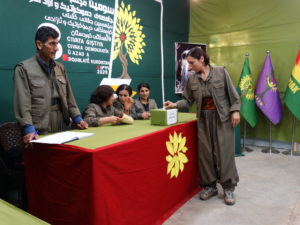 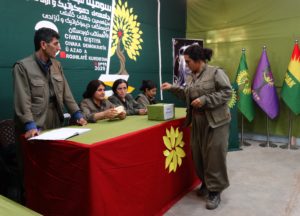 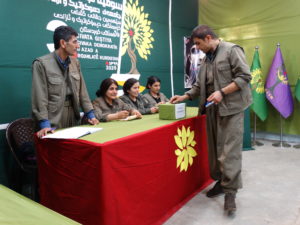