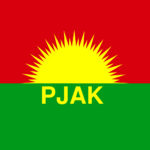 A message from the co-presidency of Free Life Party (PJAK) to activists of the Kurdish hunger strike: Our movement has only followed on one path which is the path to victory.
You shall know well that you’re in the heart of any freedom fighter and our libertarian people in the Eastern Kurdistan support your action with the ultimate power and will.

The co-presidency of PJAK issued a statement and declared its solidarity with the Kurdish hunger strikers, inside and outside of the Kurdistan.

“We Salute the noble resistance of Leyla Guven and all other hunger strikers. Resistance is life, this meaningful doctrine has given a spiritual meaning to your indefinite hunger strike and all other freedom fighters. Simultaneously, it has shown the substantial willpower of our people to the entire world through the leading role of free women. The fears of the occupants and the conservatives have increased following the inimitable and limitless power of this strike.

The struggle for liberation in every stage and in every way not only attracts the affection of the people, but it also produces fear and panic in the invaders and dictators heart. The struggle of our people has reached the highest summit of sacrifice and broken all boundaries in order to gain freedom. The flames of freedom can be seen with the struggle of freedom fighters in the Zagros mountains. Your Hunger strike with its limitless devoting and withstanding has left behind all the boundaries and lightened the glory of freedom more than ever.

Dear Leila Guven and all other freedom fighters who have reached the peak of this stage with their hunger strike campaign, you shall know well that you will end the confinement with this historic struggle, and will give a historic lesson to all the dictators that nothing can stop the glow of freedom anymore, even imprisonment. You have become a symbol of freedom fighter and indeed a symbol of life and liberty for any freedom seeker individual.

For this reason, We warmly shake your hands and wish you victory from the depth of our hearts. You shall know well that you’re in the heart of any freedom fighter and our libertarian people in the Eastern Kurdistan support your action with the ultimate power and will. Our movement has only followed on one path which is the path to victory. We shall win”