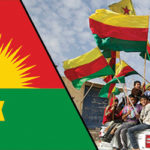 From the earliest days of Syrian conflicts, our nation in Rojava has chosen the third approach in pursuing their political, legal and social rights. Kurdish approach to the current devastating conflict in Syria posses’ foundation political and ideological solution to the conflict.

The official declaration of democratic self-management system in Cizire, Efrin and Kobani is factual institutionalized entity. Systematic and comprehensive attacks against the de facto administration of the Kurdish people who are facing aggressive attacks from the Jihadists were not unexpected.

Kobani is surrounded by the terrorist organization which is called Islamic State of Iraq and Levant, who has been supported by some regional governments. Turkey is one of the regional states which is supporting Jihadists financially and logistically.

The recent attack on Kobani is the obvious example that they attack on whole Rojava and eventually on whole Kurdistan.

Over the past few days the siege has been intensified which is a regional plan against Kurds, who cannot accept the Kurdish Democratic self-administration system and Kurdish status in Rojava. Firstly, the aim of the present siege by the Jihadists and attack are to massacre Kurdish people in that area. Secondly, Syria because of its geographical status has significant impact on and also determines the future geopolitical and geostrategic position of the entire Middle East. Rojava as a part of that geographical area has enough potential to demonstrate and determine the political status and democratic future of the Kurdistan.

Undoubtedly, current sensitive situation in Rojava necessitates unification of political parties and Kurdish organizations regardless of individual and group differences or interest. Failure to put aside group interest has historical consequences and it is time to unite our power and support our people in Rojava.

Free Life Party of Kurdistan (PJAK) respect and proud of the Kurdish resistance in Rojava and again declare its overall preparedness to support Kurdish homeland in that part of Kurdistan.