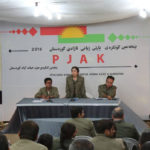 During the congress, PJAK evaluated their activities of the past two years and presented a report on their activities to Congress. PJAK within a resolution insists as a political party in Rojhelat (East Kurdistan) and Iran, should accomplish their roles and responsibilities in line with the development of the Democratic Nation in Kurdistan and Iran.

PJAK also calls all political forces and civil societies in Rojhelat and Iran to expand efforts to build a common front in the direction of democratization of Iran.

PJAK was founded by a group of students and activities of Democratic Unity Movement in 2004. PJAK during its 12-year struggle always tried for a political solution to the problem of Kurdish in Iran, but the Iranian government always has responded to these efforts by oppression, invasion, death and prison.

English version of final declaration of the 5th Congress of PJAK will be published soon in our web site. Please click on the language name to read the declaration in Kurmancî, Soranî or Persian.