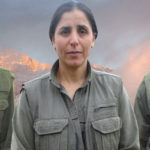 PJAK: WE GLORIFY TO THE MEMORY OF MARTYR BERIVAN AND TWO PIONEER CADRES OF OUR PARTY.

On the morning of 6th February 2016 (16 Rebandan 2715), the Turkish warplanes of the Turkish military invader with collaboration from the Iranian invader regime bombarded several PJAK bases and barracks in the Media-Protected areas severely.

Eventual of the bomber struck a member of our party’s assembly by name Gulnaz Alipoor, known as (Berivan Hajar), and two pioneer cadres of our movement by names Amra Turker, known as (Shiyar Van) and Farzad Karimi, known as (Heja Mad), gave their pure souls to freedom.

In respect of the personality of Havall Berivan, Heja and Shiyar, we remember and keep in mind them and all of the martyrs of February and pay our compliments and condolences to them.

Martyr Berivan Hajar was one of the struggling women of East Kurdistan who achieved a figure personality in a short period, led the struggling of Kurdish women in East Kurdistan, and continued to thrive in every field of struggle, which her effectual blossoms and flames up to date ever.

With her tireless efforts of Apoism struggle women cultivated and developed her character in her interior heart, and did not allow herself to be prevented in pursuit of freedom and achieving her goals of being as a mother.

Rather, she insisted on providing hope to women who were looking for an approach to achieve the illumination of freedom.

Comrade Berivan joined the guerrilla ranks as a revolutionary mother against the tyranny and thought of the patriarchy and to achieve freedom and revenge on the Iranian patriarchy.

By participating in the liberation revolution, the horizons of life flourished and she took on the duties and responsibilities as a pioneer in all the fields of struggle, and was forever for the people and comrades of the resource of the power, the morale, the friendship and learning.

Since comrade Berivan, as a mother who was suffering from the sore of the communal, understood the feelings of the women well and tried to heal the sores of the women of East Kurdistan with warm love.

The sincerity, deploring, purity and virtue of the martyr Berivan have become a reason for her to be loved by her beloved people and comrades and to remember the memory of every individual with a clear conscience and freedom in the history of our people’s liberation struggle in East Kurdistan, therefore her memory gleams forever.

Due to the love and affection of the people of Eastern Kurdistan, Martyr Shiyar Van, who was a native of Van, defused the invader set boundaries in his mind and served the legitimate grounds of our people in East Kurdistan with a high sense of nationalism and patriotism.

For a long time, both in the East and in the Media-Protected regions, with the youthful spirit and emotion he was introducing the Apo’s thought and consideration to our people and to join the struggling the youth and to organise the people uninterruptedly was struggling.

Martyr Heja Mad was a young and loyal researcher comrade explorer of truth and freedom who was born in South Kurdistan and as a child was forced to emigrate to East Kurdistan and grow up in the city of Mariwan.

Comrade Heja since his childhood stood up to the culture of subjugation and occupation and with the spirit of revenge involved in the revolutionary struggle, and was comprehending the advantages of revenge on the occupiers of Kurdistan.

That is why in the personality of Martyr Berivan, and our comrades Heja and Shiyar, we once again commemorate all the martyrs of the path of freedom and pay tribute to the struggle against fascism and the occupiers and we hasten our struggle to achieve their aspirations