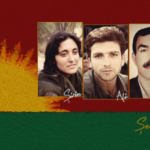 Programs of PJAK’s overseas committee on anniversary of 9th May

Five years ago in the early hours of Sunday, May 9th of 2010, the Islamic Republic of Iran executed four of our beloved comrade Shirin Alam Hooli, Farzad Kamangar, Ali Heidarian, Farhad Vakili, along with a Persian political activist, Mehdi Eslamian. Five years after their executions, the families of the victims have yet to find out the location of the buried bodies. The execution of Farzad and his companions resulted in international protests and worldwide condemnation by human rights organizations.

International bodies, UNESCO and the European Union in their annual report have both condemned the executions and the brutality of the Iranian regime towards political activists. The Human Rights Watch highlighted that Farzad was a teacher who was politically active in Kurdish affairs and rights. The execution of Farzad and his companions was not the first such executions, and will not be the last in the Islamic Republic of Iran. The Iranian regime has adopted a policy of murder, torture, arrest, terror and execution of dissidents and political activists for the past 37 years. Over the past 37 years thousands of Kurdish political activists have been executed as a result of their views and activism. Pressure, intimidation and attacks towards political activists was also followed with human rights violations towards their families. Many family members of activists have been dismissed from their place of work and education and even obliged to leave the traditional land of their ancestors.

The Kurds of Iran are among the most oppressed minorities in the region. During the anniversary of Farzad and his friends execution, we call for every human rights organization and bodies to protest the brutality of the Islamic Republic of Iran and support the Kurdish Freedom Fighters in Iran, Kurdistan and Kurdish activists in the diaspora. We also call on the international community to support the Kurdish community in their protests against the brutality of the Iranian regime in the diaspora.

The Zagros Youth organisation will distribute information leaflets in many cities in Sweden on the 8th of May. The leaflets include information about our executed comrades and their activities.