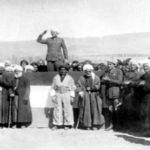 Sustaining national unity is the guarantor of defeating the enemy

One of the main goals of society is achieving self-governance on large scale while preserving its own identity and existence. The survival guarantor of the society is to achieve such level of self-awareness. On the other hand, occupying forces continually aim to target and destroy the self-governance and self-management ability of the society to establish and maintain their illegitimate authority. One of those nations, which showed its will and power of leadership in various historical periods, is the Kurdish nation that at times turned into a standard model for other nations in the region. The Kurdish social-political management have been enriched throughout history whenever our nation had the chance to express itself.

The Republic of Kurdistan in Mahabad is a genuine representation of one society achieving its self-governance power. Under the thoughtful leadership of Peshawa Qazi Muhammad, the Kurdish nation acquired this achievement. Despite all the criticisms, the self-ruling by Qazi Muhammad is a successful example of in its timeframe, which allows it to be updated. On 73rd martyrdom anniversary of popular leader of the Republic of Kurdistan known as Peshawa Qazi Muhammad, we are honoring his and his comrades’ memory by renewing our promise with their high aspirations and goals. We will continue to fulfill the orders of that precious leader who requested the Kurdish nation to keep their unity and avoid trusting the enemy.

The Free Life Party of Kurdistan (PJAK) continues the path of Qazi, and utilize the historical experiences gained as a base for creating national unity and establishment of Kurdistan’s national congress.