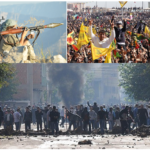 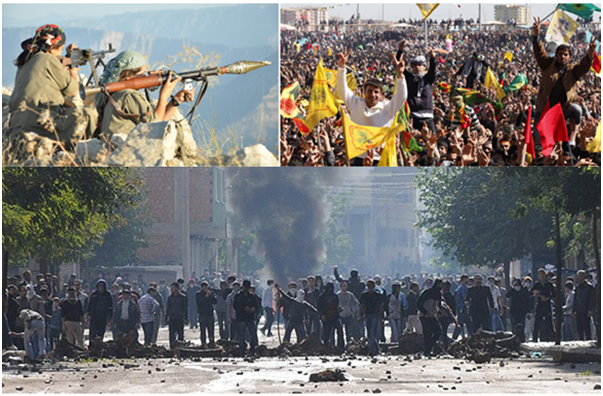 Extensive sequential attacks by the Turkish occupation army on the Matina, Zab and Avashin areas of the war have spread throughout the border areas of southern Kurdistan. Condemning this occupation fascism is possible only with the revolutionary war of the people. As “The Democratic and Free Society of East Kurdistan (KODAR)”, we consider these attacks as genocide and strongly condemn it.

The war that the occupier Turkey has been started since 2015 with the aim of genocide uninterruptedly, has transformed a serious part and the first priority of the World War III. The fascist Turkey attacks have faced all Kurds and all four parts of Kurdistan in serious danger. Even other existence peoples in the land of Kurdistan are in danger of genocide. Therefore, the genocide of oppressed peoples is also a part of the conspiracy of the World War III. The Turkey invasions pave the way for full occupation. Not only the superpowers by leading the US have given the green light to Turkey, but they have designed and planned the war as it was during the brutal stages of World War III.

The world and Turkey superpowers are using the existence of the South Kurdistan-Iraq Democratic Party (PDK) as a tool to accomplish an incomplete genocide of the Kurds. This party has become a tongs of the world forces, which involved in the war against the mountain stronghold of Kurdistan and has endangered all the national and historical achievements of our people. Certainly the life of no individual or nation is safe. Turkey accepted the existence of the regional government of South Kurdistan on a conditional and temporary basis in 1992, if the PKK would be eliminated, and today it is certainly thinking of ending the existence of the PKK and the achievements of South Kurdistan at the same time. This conspiracy has been assigned to the Democratic Party itself. However, the Guerrilla forces, by experience of patience and endurance, have prevented any civil war between the Kurdish forces; therefore the regional forces are indebted to the Guerrillas.

All sides in the war, especially Turkey, urgently need the collapse of the mountains, the only friend of the Kurdish people to occupy all regions and cities. They are aware certainly that as long as the mountain stands, all their attacks will be defeated. Nowadays, the mountains of Kurdistan have become stronghold forts against World War III. Without occupying Kurdistan, they cannot re-conquer and divide the Middle East again. Therefore, this war determines the fate war of all the nations of the Middle East.

The dimensions of the war against the Kurdish nation are not limited only to the military dimension, but cover all political, social, ecological, economic and cultural fields. It is a full-fledged war that will severely affect the future of the entire Middle-East, especially the Arabs and Iran. The cultural and existential resistance of all the nations of the Middle East is now taking shape during the resistance of the Kurdish People’s Liberation Movement. Believing in this fact requires the vigilance and awareness of the nations under oppression.

The Guerrilla forces continue to resist in various parts of Kurdistan with a coherent plan and have still defeated the Turkey warmonger, despite offering many alternatives. The Turkish fascist government’s eventual in attacking the areas of Matina, Zab and Avashin after the catastrophic defeat of Gareh have angered all the superpowers involved in the war.

Certainly the complementary circle of the Guerrilla resistance is the flawless uprising of our people. The uprising will determine the defeat of the enemy, because both Turkey and the world superpowers are experiencing the greatest crises in their history, and the fascist governments of Erdogan and Bagçeli are close to the end of their tragic. Each of their attacks is essentially an attempt to save the two regional guarders of the Western superpowers. They are well aware that the defeat of Turkey means the defeat of the dangerous processes of World War III. The victory of the Kurds and the defeat of Turkey could stop the World War III. The People’s Revolutionary War can also flare up powerfully in the face of World War III, in which the Guerrilla forces have performed their duties.

As “The Democratic and Free Society of East Kurdistan (KODAR)”, we strongly consider the genocide attacks of the Turkish occupation army as a sequence of attacks for complete occupation. At first, it threatens the destruction of southern Kurdistan. The uprising of the people of Kurdistan against fascism is more than a human duty; and is an inescapable and vital right in this historical circumstance. The Guerrilla resistance facilitated this uprising and has provided the conditions for it.

We diligently invite all our people and parties in all four parts of Kurdistan, the oppressed nations, especially the Arab and Iranian nations and other sections of the people, such as the youth, women and intellectuals that by staying on the battlefields, they avoid the terrible dangers of their future. In addition, we call on the youth to join the Guerrilla forces in order to preserve the achievements of the resistance. The natural resistance will guarantee historical life by supporting the resistance of Matina, Zab and Avashin along with the stability of Qandil Fortress.

The Democratic and Free Society of East Kurdistan (KODAR)