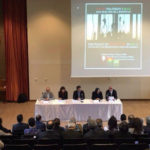 The Final Resolution of the conference: The Policy of Execution in Iran

The different nationalities in Iran have not been able to get desired results, despite their continuous struggle for democracy, freedom and acknowledgement of their identities. One of the main reasons for this is the lack of an unified as well as a lack of democratic front that could reassure an assembly of nations and liberation forces. Iran has lacked the necessities to enable such unity among their political organizations during three decades of struggles, despite all their common grounds in cultural, social and historical aspects. While there has been a resistance against various political, religious, national, sexual and economic injustices, simultaneously a cultural massacre has been committed towards these different nationalities, requiring the need to find a common platform in their struggle that could result in a cooperation between liberal organizations. Against all the policies of division and rule, suppression, intimidation, imprisonment and execution, the only remedy is undoubtedly a “democratic union”.

Ever since then uprise of the regime of the Islamic Republic of Iran, the process of execution, imprisonment and violation of human rights have increased. The Iranian regime has tried to build a barrier against liberal ideas by means of imprisonment and execution, that indeed are the biggest crimes against humanity. In fact, in this way, Iranian regime has tried to erase the problems instead of solving the issues, and all of this in order to save and maintain its power. The executions have not only increased the political, social, cultural and economic problems but also in itself generated deep crisis within all dimensions.

On 21 May 2016 a conference was held with the cooperation and initiation of Kurdistan National Congress (KNK), the Free Life Party of Kurdistan (PJAK) and Ferzad Kemanger Foundation. Various parties and organizations participated in this conference and discussed political, legal and security aspects of the policy of execution by the Islamic Republic of Iran and its effects on society. In addition, the human rights situation in Iran and policies of Iranian regime against the nations of Iran were discussed and finally participants reached to common points to confront them.

Speakers of the conference included: