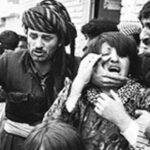 The authoritarians, violent, nationalist and perpetrators of mass murder and repression will never be forgiven by the court of history. Abul Hassan Bani Sadr, the first president of the Iranian provincial government, is one of those persons who was particularly involved inhumanely in murdering and repressing the Kurdish people in East Kurdistan. Today, after the death of Bani Sadr, everyone realised what the fate of the persons who pollute their hands with the blood of the oppressed peoples is. The problem is not just a shameful person, but a repressive person like Bani Sadr, not the apparatus made up of persons with his habit and personality who have turned Iran into a prison, torture centre and even worse, for 40 years, and a platform for the execution of freedom fighters.

Bani-Sadr has always been part of a dreadful and authoritarian current, the current of the arrogant Iranian nationalists, whose only shameless desire was hegemony and power-seeking, for which they were willing to shed the blood of innocent peoples. Bani Sadr was one of the first and most power-hungry fascists at the head of the provincial system to mobilise the Iranian army to destroy Kurdistan and shedding the blood of innocent peoples. Therefore, he was one of the first people trusted by Khomeini to be appointed as the first president of Iran and the head of the Revolutionary Council. Even before being appointed the presidency, he was in the podium during the Bazargan interim government, sharply criticising “negligence and weakness in the Kurdistan issue”, and he agreed with the brutal invasion and the deadly repression.

As soon as he won the election, he was appointed as “Commander-in-Chief” by Khomeini, following kissing Khomeini’s hand, he said in an official speech and decree: “The army has a duty that until the complete cleansing Kurdistan, not to take out their feet from their boots.” As a member of the Revolutionary Council, he was aware that most of the council’s operations were performed in non-transparent and secretive affairs. He was, a fascist nationalist who rose above even Khomeini to gain power, which caused the cost of massacre our people in East Kurdistan. His greed for gaining power in his murderous actions in Kurdistan was revealed. That time was the time when the divine governors falsely and with these heinous anti-human acts claimed that they were building a prosperous and just country. We all know that Bani Sadr ordered the massacre and repression in Kurdistan, so he “involved a crime.” He fled after flood of despair and entanglement in his fascist actions. By witnessing against the self-proclaimed divine Republic in the court of Mykonos, he wanted to be called “an excuse worse than sin”. “Crime” sought to clear his tainted past. The Kurdish people, has still not been purged and genocide, but still continue their strong and determined struggle for freedom and have seen the murderers such as Saddam and Bani Sadr with their own eyes in their humiliated tombs.

In Paris, Bani-Sadr alleged that he did not state those degrading and atrocious speech regarding the Kurdish people and Kurdistan. While the record of his speech and his official orders are accessible in all media. He was as a member of the “Revolutionary Council”, the policymaking body and theorist of Iran at that time within Khomeini’s monopoly system, so he could not clean up his sinister past with those denials. At the beginning of the revolution, Khomeini’s absolute system seized to annihilate other left wing revolutionaries and secular dissidents, eradicated all left and right-wing parties, and staged the first coup by the name “Cultural Revolution.” Bani-Sadr was one of the main supporters of the coup at that time, and at the University of Tehran, he personally delivered a “disgraceful speech” to the “Revolutionary Council” for the coup.

Bani-Sadr, as the “Commander-in-Chief of the Forces” and under Khomeini’s direct order, involved in crimes against all liberalism, democrats, and oppressed peoples of Iran, especially the Kurds, in all coups and assassinations. However the death ended his exist physically, but his criminal case must still be in progress. The Kurdish people are duty to demand justice investigation against him and such him, who are still authoritarian in the divine system and Crimes against humanity are reported in public international law as atrocities similar to those of Bani Sadr and his instigators. This is the only method for justice to be done for our people in East Kurdistan so that they will not see the history of these murderers again with their eyes.

Crimes against humanity are reported in the public international law as atrocities similar to those of Bani Sadr and his instigators. Bani Sadr was thinking that by suppressing and murdering the Kurdish people in Kurdistan, he would be able to diminish the dignity of our people and trample on the human dignity of the Kurdish people in the presence of pan-Iranian nationalists, but the history disgraced him. The operation of Bani Sadr and his bloodthirsty army was a clear example of brutality and even disregard for the human laws of Islam. These crimes were not only an ordinary murder, but racial genocide, because they were carried out by their law and formal, and also openly and systematically. The tyrannical religious role in this incident was their prelude to massacres, and history and the Kurdish people will never forgive them. These crimes ruined the rights of the Kurdish people, such as their efforts to achieve autonomy and peace within Iran’s borders.

We should never forget the fact that although Bani Sadr and the religious leaders involved those crimes and murders, but unfortunately the Court of Peace and Justice has not yet been formed in Iran and the international community to take him and others like him to the justice. French society in particular, by taking refuge in Bani-Sadr and not prosecuting him, proved that they consider in silence only about their own policies and interests. In addition, any person like Bani Sadr, even if he has involved an organised crime, will not be brought to justice if they do not consider it to the detriment of the government and their glory. It was even proved that the United Nations does not have the power and judicial authority to handle the case of the likes of Bani Sadr. Because the interests of the world powers are important, not the programs of that organisation, and in general its programs are entirely propaganda.

The main ridiculous is that under the 2005 enactment, “the duty of preventing genocide and protecting the citizens of the world” was entrusted to the UN Security Council, of which it is a part, because the world system is powerless and that the implementation of justice and peace in their plans has no place for the Arabs. Even the International Criminal Court (ICC) has no jurisdiction and is not allowed to administer justice as well. Even the Hague tribunal has not taken any action against them with their loud propaganda. Meanwhile, large factions of our people were murdered in the streets by the army under Bani Sadr’s orders, but those world centres have been silent for more than forty years.

The awakening of the Kurdish people and their parties and liberation movement in the face of such cases is not limited to a short historical period and should not be forgiven, like Saddam and Bani Sadr, until justice is done for our people. The consequences of those murders and repressions under Bani Sadr are not only limited to forty years ago, but the subsequent are even before forty years ago. That all the repressions, imprisonments, tortures, executions, street murders, deprivations and hurting policies of assimilation and deprivation of liberties, which are a clear example of cruelty to humanity, continue. Relieving the suffering of our people is only possible to some extent by administering justice and prosecuting criminals, but with full freedom, they will achieve their wishful and targets of their rights.