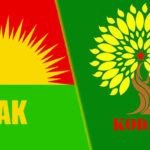 Iran has faced economic, social and political collapse crises and has reached a blast. Other Iranian nations do not tolerate this situation, and the regime has not been able to maintain the status quo in the past and will have to make a change to the solution. Kurdistan has become the center of World War III in the context of the internal and external crises of Iran, Turkey, Syria and Iraq, following the goals of the world powers. It therefore seeks to be presented in this highly decisive, comprehensive way to find a solution that the goal of a democratic and free society of the East Kurdistan is to address the issue of conflict resolution and destruction in Iran and Kurdistan. In recent years, Kurdistan has been plunged into invading occupations, such as Turkey and ISIS, and that the danger of this post-Syria regional conflict would be to cover Iran. This is despite the fact that the conservative regime of Iran after four decades has faced nations with global threats and intolerable economic, political and social crises, and has not been able to solve these issues with regard to the tense nature of the violence and nationalism so far. In recent weeks, in the aftermath of the December 2017 demonstration, the people of Iran and the market came to the streets, but the regime has crackdown on the demonstrations; the economic crisis has risen alongside the political and social crises, but the government and the regime have only their goal. The war against the outside and inside of the title they do. The demonstrations are irreversible and irrepressible. As you can see, no foreign interference or any of Iran’s internal and external opposition forces have not a specific plan and project for no-conflict resolution. The world powers are increasingly aware of these weaknesses and gaps in Iran, and their efforts are making the current crisis worse. KODAR has warned earlier that the missile program are issues that have been posed by the powers of Iran itself and not related to the nations. Issues of freedom of nations and democratization are the only priority issues. Today, the policy of pressure and overthrow against the Iranian regime is applied, and this conservative system does not oppose a democratic settlement, and does not allow threats to become a democratic opportunity. It even opened the way for Iranians to Syrianism. On the other hand, Iran’s current regime continues to face intolerable political conflicts against the peoples of Iran such as Kurd, Turks (Azerbaijanis), Baluchis, Arabs, etc. In this context, the issue is more intense and more global, and it can both the Middle East, Iran and Kurdistan securer the storm of war. In the midst of the Third World War, it wants to address the issues of the Iranian and East Kurdistan nations. KODAR is practically and exclusively the only system with a modern project and program called Democratic Confederalism and the Democratic People’s Republic, and even beyond the legitimate and legitimate military defense of the community. The roadmap illustrates the clear threats and opportunities and includes the project for “people and the streets” and reaching out to the parties calling for resolution. The demands of the KODAR itself is presented in the form of suggestions and several fundamental dimensions. In this regard, KODAR’s goal of offering a way to democratize Iran and the East of Kurdistan, which is the most natural and logical, is the democratic project without discrimination and differentiation among nations, and even in the political arena, between the internal and external Kurdish-Iranian parties. The freedom of women is based on the values of the people and the nations and their role is to restore a democratic society. The unity of the nation and the opposition, Kurdish parties and organizations are calling for a democratic political role in Iran. It does not discriminate between any political, national, religious or racial existence, and even contributes to the revival of society. The Iranian and East Kurdistan communities are more closely aligned with freedom, and the KODAR is struggling to do not lose the opportunity. In the next few days, the presentation of KODAR’s road map will be a sign of a clear intention in democratic politics and embracing everyone as a political, moral, and enlightenment within the framework of the Democratic People’s Republic. That a free and democratic Iran and Kurdistan should be restored with the suffering of the peoples.