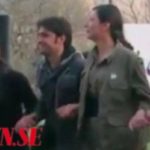 To the public opinion, newspapers, politicians and civil actors in Sweden!

On 28th of September, the newspaper Expressen reported on the Swedish-Kurdish politician Evin Cetin’s visit to our areas and termed it as a visit to a so-called “boot camp”. These descriptions are false and are not descriptive of present reality.

The fact that Expressen chose to use the term terrorist to describe PJAK is a violation of journalistic values and changed the article from having been informative to judgemental and plain slander.

First and foremost, it is important to point out that PJAK is a political and democratic movement fighting for the Kurdish people and the Iranian peoples’ fundamental rights. So far, dozens of our members have fallen victim to the state terror of the Islamic Republic of Iran, and many have been executed by hanging in the Iranian prisons.

We would also like to point out that PJAK is neither in the European or the U.S list of terrorist organizations. The only list PJAK is listed in is that of the U.S. Treasury Department and this is not in reference to terrorism, but only because of the link that exists between PJAK and other Kurdish organizations that are considered terrorists by the U.S. The enlisting of PJAK was not based on any legal grounds and a legal process is currently at work in the U.S. to handle this.

The much talked about movie clip was on the agenda of the newspaper Expressen, several months after, the documentary in which it is included, was published in the media. Evin Cetin’s visit coincided with the celebration of the anniversary of the establishment of PJAK and during this open celebration; we had visitors from more than 48 international political and non-profit organizations as well as approximately 50 newspapers, most of which were international ones. It was during this day that the movie clip in question was filmed and we were located in a Kurdish village and not as stated in a so called “boot camp”.

PJAK believes that the reports detailing the visit and the subsequent articles can best be describes as apolitical campaign in which the Kurdish question and PJAK are made to suffer on the basis of political Swedish party conflicts and weak journalism. This campaign reminds us Kurds of the time Hans Holmer was conducting investigative work as recently described by Jan Guillou in an article in the Aftonbladet newspaper.

Public opinion and the political climate in Sweden are in a great need for a bold political re-evaluation in relation to the Kurdish issue. Sweden must once and for all realize that they can not appoint their counterparts for solving the Kurdish issue and at the same time continue using the terrorist stamp and criminalize the Kurdish freedom movement.