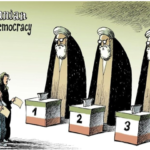 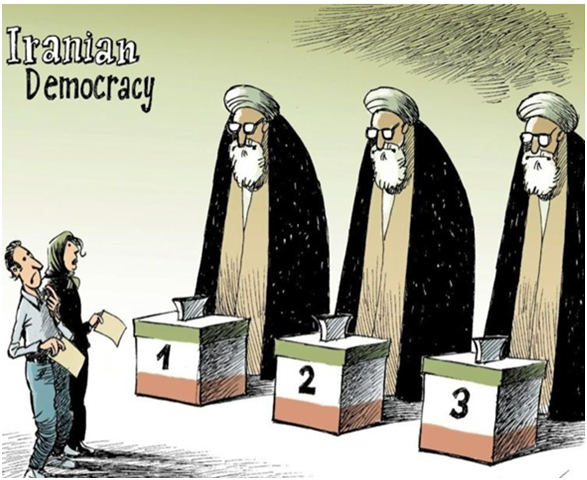 While we are approaching to the eleventh threshold of the presidential election and the sixth period of the city and village council’s election is more than four decades, it has been and is the only category observed in the record of the provincial republic’s absolute system, fascism, assimilation, suppression of uprisings, assassination and opposition to any opportunity for freedom and democracy of civil society. All the efforts of the system, through comprehensive propaganda and engineering, are aimed at holding a theatrical election, while it has already determined all the results before them. The distinction between this election and the previous ones is that it gives an extremist and dominant military image because they feel threatened by both the people and the rivals of global hegemony.

The illustration of the system is set up by the extremists to monopoly power in accordance with the plan to escalate the war. Even an attempt to restore the Joint Comprehensive Plan of Action (JCPOA) and claim the lifting of sanctions, which has nothing to do with the democratic rights of the people, will not mean the end of the war. Therefore, Iran in both dimensions internally and externally, is merely compromising, not concluding a treaty and resolving the roots of crises. Nowadays, Iran is at war with fragmented sides, which has manifested itself beyond the military arena, inside Iran in the form of intensifying militarism and deepening super-crises. The system is in a state of extreme crisis in the social, political, economic, ideological and cultural spheres, and it has lost control of crises. Consequently, the suppression of civil and political liberties and the complete suppression of any liberalism voice of oppositions has become its strategic policy every day for fear of a sudden explosion of society against the incompetence and oppression of the system.

The foundation of solving women’s concern in East Kurdistan depends on the political solution of the Kurdish dispute and the fundamental problems of society, not elections. Misogyny is one of the strategic foundations of the system’s survival. In the recent decades, women have been faced more repression and denial of freedom and existence than any other society. The only way is a complete restoration of democratic rights to women radically and a change in the current patriarchal structure, but the constitution is the obstacle. The Kurdish, Lor issues and the issues of the Arab, Azeri, Balooch and other nations are among the dangerous issues in Iran.

The attitude of the Iranian regime towards the Kurdish issue is still the same as the former militarism and cultural-political genocide, and not the slightest change is observed. Accordingly, the system of absolute guardianship and its factions, as the most extreme form of fascism and chauvinism, have acted against the identity and existence of our nation in the recent decades. This is while KODAR and PJAK have proved their liberal intentions by defining the third line and confederated and the democratic nation. With this deplorable situation, the going of the oppressed civil society and nations to the ballot boxes, is the same water that splashes water into the mill, which is the tantamount to self-harm and suicide.

The fascist regime, through a cunning trick, has set up the council elections with presidential elections to show a high participation in the observation of the world and the media. It is to illustrate any participation in the councils into the presidential elections and mould for the system. The democratic struggle of the society is long-term and artistic; the people themselves have the power of discernment and choice, therefore our people must create opportunities for themselves in the constituency councils and shorten the regime’s hand from the constituency councils. Undoubtedly, any vote is a bullet against Kollbars, a bowline to thicken gallows, the humiliation of women and the destruction of the environment.

Such as “Democratic and Free Society of East Kurdistan (KODAR)” and “The Kurdistan Free Life Party (PJAK)” according to the above-mentioned issues and believing in the democratic and radical struggles of the people, subject to the fact that there is no ground for a free and democratic election, we explicitly boycott the thirteenth presidential election in Iran and explicitly state the following reasons:

1- For more than four decades of oppression and domination, cultural genocide, political, and economic has been shamelessly perpetrated by the Iranian provincial regime, and not the slightest change in the regime’s actions has been observed. The rights of nations such as the Kurds and Lors, Arabs, Azeris, Balooches, and others have been trampled. The concepts of freedom and democracy have no value to the authoritarian of the system, and the progressive of overall development has been deliberately hindered, which should be related to the oppressed nations.

2- During the rule of the “guardianship republic” system, all the uprisings of the people were suppressed and the insurgents were being wallowed in soil and blood. The uprisings of December 2017 and October 2019 are clear and historical examples in the regime’s massacre record. The approval of another election means the repression of the people and the opposition throughout Iran.

3- The peoples of Iran are very dissatisfied with the current system of Iran and have obviously demonstrated it with the uprisings in recent years and the daily protests of the strata. Therefore, we must value this performance of the people and, accordingly, adopt a boycott as a radical democratic approach.

4- The action of the regime and all its factions towards the Kurdish issue has been and is in the same way, fascist and hostile. They still have not abandoned the strategy of cultural genocides, political and other based on the policy of assimilation and integration and has not acknowledged the existence of the Kurdish issue as the biggest political issue in the country.. It still has continued to militarize eastern Kurdistan and has continued its military offensive against Guerrilla forces every year, especially in the interior of East. The wave of arrests, imprisonments and executions, especially against environmental activists, civil society activists and the killing of Kollbars, has increased and reached a more dangerous rank. The regime’s incitement to war is a constant response to the democratic and peaceful roadmap of KODAR and PJAK, which is a hostile response to the legitimate demands of the Kurdish people.

5- The current system does not have a specific strategy and plan to solve the roots of social, economic, environmental, cultural, political, ideological and other crises. Accordingly, the regime by creating crises and moulding them into internal and external factors outside its power system has shirked its responsibility of all of them. All these crises have reached a chaotic and explosive level because society cannot bear their heavy pressures.

6- The different factions of society, such as the youth, women, workers, employees and intellectuals, are involved in the regime’s artificial crises in the most difficult conditions to achieve and provide their natural freedoms and livelihood and are constantly repressed. The regime by obstructing the liberals, denying the democratic rights, punishing and more penalizing creates more suffocation. In particular, the protests and grievances of the workers, the civil movements and spontaneous of the workers globally have suffered a great deal and all their rights are being squandered, but their protests continue, and this is an indication that all workers are considering the current system illegitimate. The share of the youth has only been arrested and executed, while the nationwide struggle of the society should be promoted on the pillar of the youth organisation.

7- The theocratic and patriarchal regime created and formed by the authoritarian power, with the growing intensity of misogyny, deprives women of all natural opportunities for freedom. All arenas of management, decision and determination-making, execution, policy-making and legislation have been banned from the women’s society. The patriarchal and sexist hostile view of women in the current system structure constantly leads to the elimination and repression of women, because they do not tolerate women’s democratic and radical struggles and confront with them with imprisonment and execution.

8- The thirteenth round of the Khordad 1400 (22/05/2021- 21/06/2021) of the presidential election has been viewed a military and belligerent face. It heralds the deepening of internal and external wars, genocide, repression, suffocation, oppression, denial, intimidation, misogyny, sociopath, imprisonment, and more executions alongside today’s explosive crises. It is clear that the regime is more than ever intending to use the people’s presence in the elections as a tool.

The city and village council elections

The Democratic and Free Society of East Kurdistan – KODAR and the Free Life Party of Kurdistan – PJAK with the believing in the democratic struggles of the society of Iran and East Kurdistan, our view of the council elections is focused only on the main dimension of our people’s rights and the efforts of the factions of the society outside the structural domains of the government.

Therefore, we assign the election of the councils and the issue of participation or the category of boycott as a free right to the society and its strata. The election is not everything. It is crucial that the democratic struggles of the people and the streets be promoted by uniting the lines of workers, women, youth, employees, intellectuals, and the liberals and democrats as a beyond order of elections, and be organised in unity with the slogan “No to execution, Yes to the democracy.” Strengthening the flow of the democratic struggles is the fundamental strategy of the people.

The Democratic and Free Society of East Kurdistan – KODAR