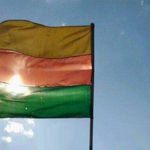 We felicitate the establishment of democratic autonomy in Rojava

We felicitate the establishment of democratic autonomy in Rojava (Western Kurdistan) to all the nations of Middle East especially Kurdish nation.

In general, the past century was the century of uninterruptable struggle of Kurdish nation in order to achieve their rights and having a honorable life. Simultaneously in the past century systematic assimilation and relentless repression against this nation was taking place which still continues in different forms, yet the Kurdish nation never desist their claims and struggles. In the 68th anniversary of foundation of Republic of Kurdistan that in itself not so long life become a democratic system, the official announcement of democratic autonomy of Rojava which has every legacy of the republic in its context, indicating that the 21st century will be the century of democratic will of Kurdish nation. The official announcement of democratic autonomy is kind of revival of all democratic values which Republic of Kurdistan very basic foundations was based on them. Therefore it is required that Kurdish nation completely defend and support this system. Democratic Canton model which for the first time in the Middle East is executing in practice by having democratic principles like co-chaired, full-scale participation of youths and women, and people-centered assemblies has the ability, not only in a short period of time become a solution approach to the issues of Syria but also the only approach for the issues of all nations who faced brutal suppressions in the past hundred years. The announcement of this autonomy is in a situation that within the Geneva II conference superpowers clearly trying to reshape the region based on their benefits without paying attention to the true demands of nations. Not inviting Kurdish nation as an independent panel to this conference is an obvious aspect of these high-handed and pragmatic intentions of these superpowers. This indicate that this conference will be doomed from the beginning.

As Free Life Party of Kurdistan (PJAK) congratulate the foundation of democratic autonomy in Rojava to the nations of Middle East and especially Kurdish nation and we declare our full-scale support to this system.