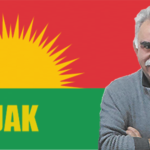 We condemn every global and regional forces that participated in inhumane and wicked action of February 15th of 1999 inter-governmental conspiracy.

The 15th February inter-governmental conspiracy was against Kurdish national leader Abdullah Ocalan. It was beginning of new intervene of global domineer forces in Middle East. Foreign interventionist forces, regional conservative governments and their dependent Kurdish forces wanted to surmount the freedom movement and democratic potential of Kurdish society. It is safe to say that serious measures were taken into account against the conspiracy since 1999 but the conspiracy is not completely vanished. The conspiracy is still ongoing in new shapes and styles. Freedom movement of Kurdish nation is now at a historical stage by relying on its own inherent power. Its success has affected entire region and turned into an alternative for models that seek to create hegemony in the region. A war of governing model is ongoing in Middle East, at one side there is model of foreign interventionist and regional conservative forces while on the other side there is model of democracy of nations and especially Kurdish nation under the leadership of leader APO.

National leadership of our party in Eastern Kurdistan is a modern freedom movement in recent years, and it is an achievement that made possible by leader APO’s heritage of preservation against the conspiracy. No doubt the captivity of leader APO for Kurdish nation and free people was a tragic event and our nation in Eastern Kurdistan elevated their struggle influenced by that event. In 1999, despite lack of coherent and widespread organizing, we witnessed one of the greatest and the most magnificent uprisings in Eastern Kurdistan which made a historical epic. In 1999, many patriotic and revolutionary youth were martyred who become the symbol of national unity for Kurdish nation. During those years there were many attempts to weaken the APOist struggle by conducting widespread operations against Guerilla forces as well as our nation in Eastern Kurdistan, but ultimately our nation showed a strong resistance. More than any time in history, the Kurdish nation has expanded its inherent organization by relying on intellectual policy of leader APO. On 15th anniversary of leader APO’s captivity, we will stand united by turning this day into day of vengeance from conspirators with revolutionary spirit of 1999. Inter-governmental conspiracy of 15th February continues the policy of massacring Kurdish nation and a strong resistance such a sensitive historical stage is possible only through attempting to officially acknowledging the rights and freedom of Kurdish nation. As Free Life Party of Kurdistan (PJAK) we ask our nation in Eastern Kurdistan and all other parts to elevate our struggle in every field with the slogan of “Freedom for leader APO is the freedom of Kurdish nation”. Finally, we will dearly remember those martyrs who sacrificed their lives in 1999 as well as conspiracy condemnation in 2006 and we insist on unity and keeping up the struggle against conspiracies to continue the path which was made by our martyrs.