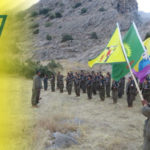 We all live in an age where all of the world’s wars have spread throughout the world. At the same time it will pave the way for further expansion of the crisis.

Kurdistan has been under criminal occupation of the government of our homeland. Despite the efforts for freedom and solution of the Kurdish issue by democratic means and without the use of military force, at the insistence of destruction of our people, we are attacked. Our units perform their duties with full consciousness to avoid conflicts and unwanted war. But Islamic Republic of Iran’s government does not abandon its warmongering policies. Our units, in this context, used their rights of self defense.

The Iranian government, by establishing military bases, dams, construction and development of special war spy agencies, the promotion of drugs, prostitution and surrender and passivity of the people and the youth are imposed.

In the recent days, the Islamic Republic have increased its Counter-Guerrilla (branch of government local forces, which use guerrilla’s appearance to mislead people’s opinion about guerrillas) groups in the fields of activity of our units.

According to our troops in this conflict, the enemy suffered heavy losses, six people were killed and many were wounded and the health of more than at least 3 is acute. Local evidence informed us that more than 10 are killed and many are wounded. Our troops returned to their areas in perfect health after the conflict. Our forces captured images of the conflict and it will remain in our hands.

On this basis, The East Kurdistan Defense Units (YRK), warn the Iranian government to abandon its policy of denial and annihilation of Kurds. YRK ask the mercenaries and traitor not to become tools for the policy of the enemy. Abandon your evil deeds and do not use your weapons against your own people and do not collaborate with the enemy. Those who are collaborating with the enemy, will face the consequences of their action.

In this regard, we ask the people and especially the young people of Rojhelat (Eastern Kurdistan); Do not accept the evil policy of the enemy against the Kurdish people and stand up against it. In response to the dirty politics of the enemy, we ask them to take their places in the ranks of the people’s liberation struggle.